New Studio Harks Back to a Musical Golden Age 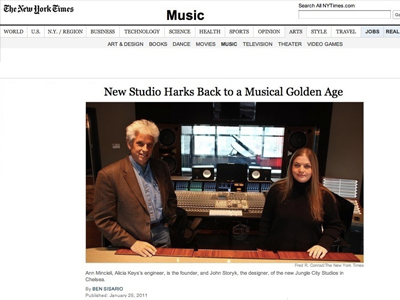 Jungle City Studios, a new recording studio perched above the High Line in Chelsea, seems to be a vision out of New York’s glorious musical past. Packed with the kind of gear that makes sound engineers salivate, like an extremely rare 1960s recording console by EMI side-by-side with the latest gleaming digital equipment, it is not the kind of place you would expect for an era of pirated music and GarageBand. And that’s before you notice the Louis Vuitton-patterned fabric on the walls.

“I compare a studio to a hotel, and I want this to be a seven-star studio,” said Ann Mincieli, Jungle City’s founder, who is also Alicia Keys’s longtime engineer and studio right hand.

Designed by John Storyk of the Walters-Storyk Design Group, who got his start working on Jimi Hendrix’s Electric Lady Studios in 1969, Jungle City is described by record executives and other engineers as one of the most impressive new studios in New York in years. It has three recording rooms on the top two floors of an 11-story commercial building, with novel details like speakers floating within the control-room glass. And while most studios tend to be windowless subterranean caves, Jungle City has wide skyline views.

Its existence is also a challenge to the prevailing wisdom that recording studios, particularly in New York City, are going extinct, rendered obsolete by home-recording technology and shrinking budgets. Dozens of rooms in the city that was once the capital of recording — including famous spots like the Hit Factory, the Record Plant and Sony Music Studios — have vanished. Those that remain have had to adjust to a changed marketplace. Many have become leaner, more flexible and yet more deluxe, offering arsenals of up-to-the-minute equipment and personalized service to a clientele that years ago might have booked a studio for three months but that now takes two weeks. Stories like that of Bruce Springsteen laboring at two studios for more than a year on “Born to Run,” or D’Angelo haunting Electric Lady for four years to make “Voodoo” (2000), are almost unheard of now, for budgetary reasons, as well as for the fact that a good deal of the recording could be done with nothing but a laptop.

“There definitely are fewer rooms,” said Craig Kallman, chairman of Atlantic Records. “But I think it’s still vitally important to the recording industry to have enough really appealing destinations for artists here in New York.”

Ms. Keys, who is not an investor in the studio but has been an active supporter of the project, has a more poetic take on the value of recording space in New York. “To know that you have an amazing place to go to right in the heart of the rotten apple,” she said in a telephone interview, “and for it to be blossoming right in the center of it, you will always need that.”

As a woman in the almost entirely male-dominated trenches of studio recording, Ms. Mincieli is a rarity. Well regarded in the industry as an engineer, she is capable of the highest level of gearhead discourse (“When the SSL J9000 came out, I couldn’t wait to learn it,” she gushed — about a 1990s-vintage console — while describing her studio education). But she is also seldom seen without a designer handbag or her diamond-studded Hello Kitty pendant.

“She can be tough as nails,” Ms. Keys said, “and anybody who tries to out-talk her will find immediately that she knows exactly what she’s talking about. At the same time, she’s a feminine lady, and she loves the things that all ladies love.”

Ms. Mincieli, 38, said Jungle City was partly modeled on the Oven, Ms. Keys’s high-tech-yet-still-cozy private studio on Long Island, and she spared no expense decking it out. Her risk is significant. Financed by private investors, Jungle City cost about $3.5 million to build, Ms. Mincieli said, and another $5.2 million to secure the real estate.

With recording budgets often half what they were a decade ago, such an investment would seem difficult to recoup. But many New York studio operators say that with so much of their former competition gone, their rooms have stayed in demand.

And some of those famous places shut down for reasons having nothing to do with lack of business. The Hit Factory on West 54th Street, for example, closed in 2005 after the death of its owner, Ed Germano, and was sold as valuable real estate; it is now the Hit Factory Condominium. Three years ago Mr. Germano’s son, Troy, opened the luxurious — but much smaller — Germano Studios on Lower Broadway, and business there is booming, he said. (In recent months the Black Eyed Peas, Mariah Carey, Keith Richards and Justin Bieber have all been there.)

“Studios are not over; not even close,” Mr. Germano said. “The days of having seven or eight studios in one city, those days are over. But the smaller, more boutique operation is what people are attracted to.”

As Mr. Storyk describes it, the old business model for studios, with big rooms that rely on long-term bookings, is nearly finished. (A few large-scale studios survive, though, like Avatar on West 53rd Street. Madonna’s “Like a Virgin” was recorded there when it was called the Power Station; more recently it has been used by Kings of Leon, Vampire Weekend and the “Glee” cast.)

“The equipment has become smaller, cheaper, more fungible, more democratic,” Mr. Storyk said. “Anyone can have a recording studio now, and everyone has one. Throw all that into a hat and you get a very different model of what a studio is.”

For Ms. Mincieli and Jungle City, that means that a studio must have the highest technical facilities as well as a distinct and inviting atmosphere — the inescapable word for this is “vibe” — that makes musicians feel at home. Too many places, she said, sacrifice one necessity for the other.

“You go into studios that will have a million-dollar console but an Ikea door that’s rattling when the music is playing,” she said. (Jungle City’s 250-pound doors lock into their soundproof position with the help of magnets.)

The studio reflects Ms. Mincieli’s tastes down to the tiniest detail, which she has monitored obsessively. On a recent tour she paused to consult with a contractor for several minutes about two shades of brown on an electrical socket cover. She was in the studio on Christmas Day, testing keys and checking out the latest paint job.

“I always dreamed of owning my own studio,” she said, “but I wanted it to be not just the generic thing you see everywhere: the black couches, the gray rugs. I book places in Spain, in Italy, where you walk out the door and the view is incredible. I want to give the recording community a shot in the arm, and know that there’s something incredible in New York.”

The bookings have already started coming in, she said. Beyoncé has already performed the maiden session this month, and Ms. Keys is coming right up.

“The budgets are there,” Ms. Mincieli said. “They’re not as high as they used to be, but they’re there.” 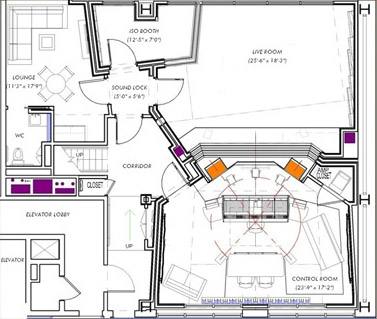